Why Build With Straw

Straw is an annually renewable resource that is mostly wasted. Each year millions of tonnes of straw are burnt or left to rot. It is estimated that during one year in New South Wales alone rice farmers burn over 600,000* tonnes of rice straw, releasing 30,000 tonnes of carbon dioxide and 2,000 tonnes of particulate directly in to the atmosphere. If all the rice straw in the Riverina of N.S.W. was baled and used to build an average 200 square metre straw bale house, then we could build 48,000 straw bale homes on an annual basis. So, rice straw alone could build the walls of approximately 1/3 of all new homes built in Australia annually.

A straw bale wall system has very low embodied energy. Embodied energy is a measure of the amount of energy used in production, transportation and construction for a given material.

Straw is tough and fibrous and lasts a long time if kept dry. There are grain crops grown in most parts of Australia and NZ, so this building material is available almost everywhere with minimal transportation costs. Straw from wheat, oats, rye, rice and barley can be used to make bales suitable for building construction. Straw has been used for centuries because of its structural integrity.

Straw has excellent insulating properties. Straw bale buildings perform extremely well in sub-tropical and temperate climates around the world. A standard straw bale is 450mm thick with an R-value in excess of 4.8 and up to R9 for a standard bale. The R-value is a measure of the resistance of a material to heat flow through it. A rendered straw bale wall has almost 5 times the R-value of a brick veneer wall. A straw bale wall has over twice the minimum recommended R-value for the wall of a house in most parts of Australia and New Zealand. Combined with passive solar design, a straw bale house should not require artificial heating or cooling, substantially reducing the annual cost of running your home.

Homeowner participation. Savings in straw bale buildings can be obtained with owner builders supplying their own labour using friends and relatives in the construction. The perception that straw bale is cheaper than conventional building technology is incorrect. In actual fact straw bale building is competitive to other forms of building but can be more expensive dependent on design and complexity of the building itself. However, for a given budget and with a good design, you can end up with a vastly better home using straw bales as compared to conventional materials. 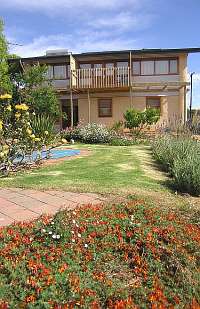 Straw bale homes are healthy homes. Unlike many conventional building materials, straw bale walls do not exude toxic fumes. Everyone benefits, including those with asthma, allergies, and toxic sensitivities.

*Based on data received from the Rice Growers Association of Australia, Leeton, N.S.W. 500 bales weigh 12.5 tonnes and 500 bales will build approximately 200 sqm of building.